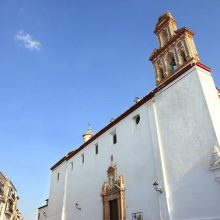 La Merced Convent was founded in 1509. The church’s pièce de résistance is the shrine dedicated to the title sculpture, Our Lady of Mercy, which was commenced in 1739 and is considered a fine example of Écija’s Baroque. 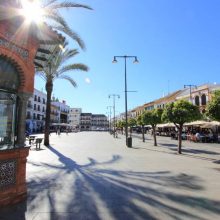 Despite the square’s recent renovation, some of the neighbouring buildings preserve 17th- and 18th-century elements. In the past, Plaza del Altozano was the epicentre for the town’s cultural events, such as famous bullfights and the passing of religious processions (very much like today). Given their privileged position and unbeatable views over the square, the surrounding properties are sought after and their balconies are used as private boxes during the town’s festivities. 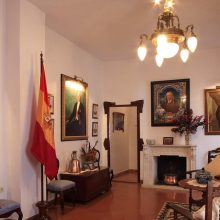 This museum is located on calle del Río, and has civil architecture typical of ancestral houses at the end of the 19th century. The museum is the birthplace of Niceto, Alcalá-Zamora, President of the second Spanish Republic. The house has a ground floor with bodega, patio and garden and two more floors. The ground and first floor are open to the public. Niceto’s personal objects are on display, such as documents and photographs. 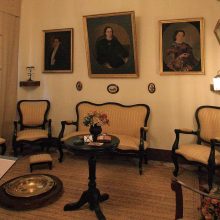 Found on the Carrera de las Monjas, it is a typical Andalusian-style house, with a large patio with porticos and modern decoration. It is a living reminder of the painter Adolfo Lozano Sidro, who became one of the most appreciated illustrators of the first third of the 20th century. He worked for the magazine Blanco y Negro and the newspaper, ABC. He is renowned for his illustrations in the book Pepita Jiménez by Juan Valera. The Landscape art museum is also housed here, which emerged as a suggestion during the Landscape painting competition that has taken place since 1988.  Its objective is to present the artistic trends associated with this recent practice. The third museum found within the house is the municipal history museum, which displays items from the Paleolithic until the Middle Ages extracted from various archaeological sites throughout the local area. 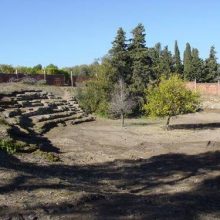 Osuna’s Roman Theatre is from the Genetiua Iulia colony. It is located in the southeastern part of the crossing between the Cañada Real de Marchena to Estepa and Vereda de Santa Mónica. This site has traditionally produced main findings from the Roman era. It seems that researchers’ results coincided when recreating the centre of the colony around the crossing of both livestock routes given the abundant findings on this site. They include bronze boards with the colony’s founding law inscribed on them. 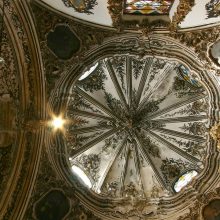 This church with its rococo design was founded in 1773 by Josefa de Mármol, and is dedicated to the icon of Virgen de las Angustias. The building was completed in 1775, and the interior decoration in 1778. The single nave has a cross-vaulted ceiling with scalloped window frames, crowned by a segmented cupola resting on a cornice. The church itself and the altarpiece are by Juan de Dios Santaella;  in the principal niche is the work of the Granadan school dating from the end of the 18th century, with the figure of Christ carved by the circle of José de Mora. The magnificent figures of San José and the Virgin and Child, by the Granadan artist José Risueño from the 18th century, are particularly charming. The portal is in polychrome marble, also the work of Santaella. 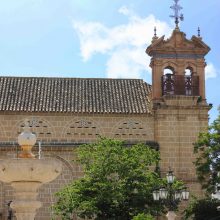 The San Juan museum is located within the San Juan church (16th and 17th century),  found on calle Rosario.  It houses the icon of Cristo de la Salud. This museum allows visitors to see interesting samples of Alcalá la Real’s religiosity, alongside elements that are characteristic of biblical diorama, such as “rostrillos” to give character to biblical figures, typical of Easter Week in Alcalá. Contact: Antonio Pérez Rosales. 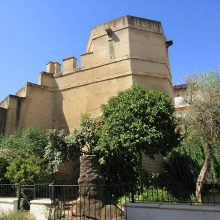 Several sections of Écija’s medieval wall have been preserved and some of its gateways can be recognised. Of the fourteen gateways documented, four originate from the Roman layout, and therefore connect the two main roads in the town. The first road goes from east to west, from the Puerta del Puente gateway to the Puerta Cerrada gateway. It is extremely interesting given the variety of historic sites and picture-perfect spots found along its length. The Torre del Carmen tower, a stretch of wall, La Cárcel and Ciudad Real buildings, the ancient inn and stone fountain can be observed along this road and provide an evocative setting: the sound of water from the fountain, the breeze and shade from the trees and impressive buildings. The second road stretches from north to south of the town, from the Puerta de Palma gateway to the Puerta de Osuna gateway. Its location is historically interesting, given the Moorish wall ruins. This stretch once provided access to the Moorish fortified town, known as Bab Usuna. The rest of the gateways documented originated in the Almohad era, and others were later than the Christian era. Several stretches of wall have also been preserved, the most emblematic are in Calle Alcázar, Cavilla, […] 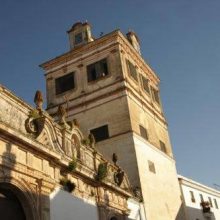