When we think of Puente Genil, we think automatically of EASTER WEEK, or “MANANTA” as it is known, which is one of the most important and unusual celebrations of religious faith in Andalusia. Puente Genil’s Mananta has a unique feel, making it a esta for the senses, where everything seems to mix together in contradictory disorder. This is the source of its mystery – and also its attractiveness. 23 religious brotherhoods hold processions through the town from the Saturday before Easter until Easter Sunday, accompanying biblical characters from the Old and New Testaments and other Christian Symbols.

This tradition dates back to around 1664. The most important moment in the Mananta takes place at dawn on Good Friday, when a band plays the “Diana” in honour of Nuestro Padre Jesús Nazareno. LENT is the prelude to Easter week, with the “SÁBADOS DE ROMANOS” procession being held every Saturday in Lent, before Palm Sunday when the “subida a Jesús” procession takes place.

THE “CHIQUITA” EASTER WEEK for children is held in May, and is the seed for the Manantera tradition.

PUENTE GENIL, THE COLOUR OF EASTER

The origins of the Easter Week celebrations in Puente Genil are inextricably linked to those of the town itself. Under the stewardship of the Marquises of Priego, Puente Genil experienced a boom in religious fervour resulting in the creation of brotherhoods which paraded through the streets during the Easter Triduum and which, from 1664 onwards, incorporated biblical figures as a theatrical illustration of different Christian episodes and dogmas. Fortunately, despite the frequent attempts of religious purists to put an end to this popular, itinerant form of catechesis, the processions have survived almost unchanged, and today the mananta arouses just as much excitement as it did in days of old.

Although the celebration actually begins a few days earlier, it is on Palm Sunday that the public and private ceremonies get into full swing with the procession of La Entrada en Jerusalén (Christ’s Entry into Jerusalem) – an event involving numerous children – and the ascent of the Romans to El Calvario (Calvary), where they sing the Miserere and the Stabat Mater. On Monday, Tuesday and Wednesday a number of processions take to the streets: La Sagrada Cena (Sacred Supper), Santa Cruz (Holy Cross), Los Afligidos (the Afflicted), El Calvario, La Virgen del Consuelo (Our Lady of Consolation), El Lavatorio (the Washing of the Hands), El Señor del Huerto (the Lord of Gethsemane), El Humilde (the Humble One) and La Amargura (Grief). The images, carried by both men and women, are lifted both by bastoneros (in front of and behind the platform) and by costaleros (beneath the platform).  But the high point of the celebration is the Easter Triduum. On the Thursday, a procession including a large group of biblical figures leaves the chapel of Veracruz and meets the El Imperio Romano (the Roman Empire) in Calle Ancha. The titular figures of both brotherhoods are exalted in what is the week’s first meeting of processions in the street.

At half past six on the Friday, the Romans move off in search of El Terrible (the Terrible One). When they meet it, they play a fanfare. As the two groups move along together, more figures appear, bowing down to Christ in reverence, and the sentence is read out to the prisoner. In the evening, the procession of El Dulce Nombre represents the world being plunged into darkness. St. John dances to the sound of the Trípili, and the Picoruchos appear accompanying the Devil and Death with their deafening drum tattoo. The Saturday procession reflects the solemnity of Christ’s death.

But Puente Genil also celebrates life, and at daybreak on Sunday rockets are let off to herald the approach of El Resucitado (Christ Resurrected). This paso is accompanied by all those who have taken part in the other processions during the week.

Every Saturday in Lent groups of penitents parade in front of Jesus Nazareno, “el Terrible” (Jesus Nazarene, “the Terrible One”), to the sound of El Imperio Romano in a ceremony known as “sábados de Romanos” (“Roman Saturdays”).  Afterwards the participants have dinner in the brotherhood headquarters and one of them tears a leg off the Vieja Cuaresmera, a liturgical calendar in the form of old lady dressed in mourning and carrying typical Lenten products like cabbage and cod. Hidden beneath her skirt she has seven legs, one for each Saturday in Lent and one for Palm Sunday.

More enlightened bishops tied to “regulate” the mananta by banning biblical figures and the rituals they traditionally performed in the processions. But Concepción Cosano Pino, the widow of the heir to the town’s ruling family and member of the Brotherhood of El Nazareno, went to see the prelate and persuaded him to allow these popular expressions of religious fervour to continue.

These figures form part of the processions as theological references. Some are from the New Testament, some from the Old Testament and some are religious symbols. Each year the members of the biblical brotherhoods draw lots to decide who will wear the mask, wig and clothes of each figure and carry the attributes of their martyrdom. Throughout the procession the images occupy the same position, clearly identifying their iconography.

Romans too form part of this allegorical processional group, although their role is less strictly regulated. Organized into sections identified by different colours, and wearing gold helmets with black or white plumes, they take part in processions from the Thursday through to Easter Sunday. Their uniform comprises a silk or velvet tunic, a short, tasselled skirt, white stockings, silk boots and a cape decorated more or less lavishly according to rank. In one hand they carry a sword or a pike and in the other a shield. Some of them carry standards and flags, and others have musical instruments. The higher an individual’s rank within the Centuria, the more luxuriously embroidered is their uniform.

Of particular interest is the group depicting Death and the Devil, with its Picoruchos – nazarenos who parade smoking cigars and pounding drums to symbolize the triumph of darkness.

At six thirty in the morning on Good Friday, the steward of the brotherhood of Jesus Nazareno makes his way through the streets of Puente Genil to the headquarters of El Imperio Romano. At dawn, the Roman soldiers march off in search of El Terrible, which is leaving its chapel with images of Cristo de la Misericordia (Christ of Mercy) with La Virgen del Mayor Dolor (Our Lady of the Greatest Sorrow), St. John and Mary Magdalene, the paso of La Virgen de la Cruz (the Virgin of the Cross) and St. John and, finally, the paso of La Virgen de los Dolores (Our Lady of Sorrows) A deep silence fills the esplanade of El Calvario until the first notes of the fanfare become audible.

Shortly afterwards, the figures reach the procession and salute Christ and, next to the bridge, a representative of Pontius Pilate reads the Sermón del Paso, the prisoner’s death sentence.

This is a rigid, tonás type falling scale saeta with a flat, almost spoken melody. It is sometimes sung as a prayer. Other typical forms of singing that can be heard in Puente Genil during Lent and Easter are the choral chants known as alondras and batidos.

For centuries a children’s version of the Easter celebration has been held in the weeks immediately before and after the 3rd May, the Day of the Cross. 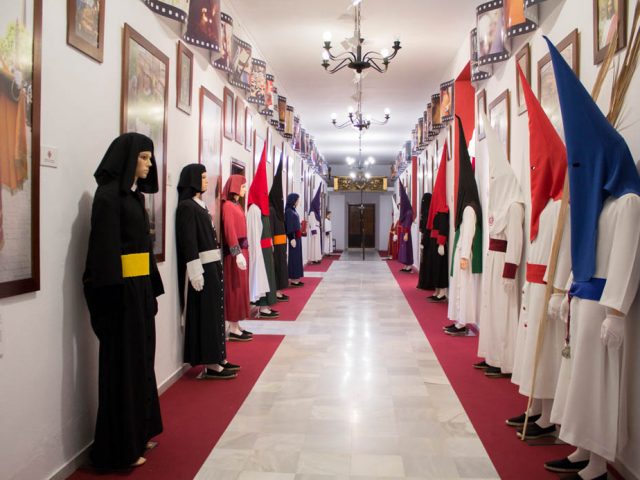 The former Franciscan convent houses Puente Genil’s permanent Holy Week exhibition, promoted by the ‘Agrupación de Cofradías, Hermandades y Corporaciones Bíblicas’ (Association of Brotherhoods and Biblical Corporations). The exhibition is home to a simulation of life in the cuartel lodgings, with an exhibition of characters and typical cuisine, as well as a video exhibition of Holy Week and Lent.  Inside the venue, you can watch a documentary video about Puente Genil’s most important moments of Holy Week; bull runs, processions, important moments for the pallbearers of the floats, Diana al Patrón, Good Friday evening and the characteristics that make Holy Week in Puente Genil unique and unforgettable.