The town’s EASTER WEEK celebrations are one of its most unique features. These celebrations combine art, aesthetics and tradition in over thirty magnicently decorated oats (pasos) which the local people carry in procession through the streets on their shoulders to the beat of a drum.

The town’s unique version of this religious event includes the phenomena of devotion to the saints, which mark the processions; these take place in accordance with strict standards of respect and solemnity, enabling bottled up emotions to ow, making these celebrations well worth experiencing.

LUCENA, TO THE SOUND OF THE DRUMS AND THE TORRALBO

Lucena commemorates Christ’s Passion in its own unmistakeable way, merging together art, aesthetics and tradition  Its principal sign of identity is its devotion to its religious images, a feeling illustrated by the distinctive way the pasos are borne along to the sound of the drums and the distinctive bugle call known as the torralbo. For the people of Lucena, Easter is an emotion enthusiastically transmitted from one generation to another. The town, with a population of almost forty three thousand, at present has sixteen brotherhoods, several of which have existed for over four hundred years.

The brotherhoods go out in procession on successive days, filling the streets with noise and religious fervour. The first to go, on Palm Sunday, are those of “La Pollinita”, El Huerto (Gethsemane) and El Encuentro (The Meeting). On Monday it is the turn of La Pasión (The Passion), with its four pasos. Processions on Tuesday include those of El Carmen (Mount Carmel), with an image by Pedro de Mena, Los Servitas (the Servites), and El Amor (Love). The head on the Christ figure in this latter procession was sculpted by Alonso Cano. Wednesday is given over entirely to El Valle (The Valley). And on Maundy Thursday, the actual day of Christ’s Passion, we have the processions of El Silencio (The Silence), with the dull beating of its black-craped drums and distinctive bugle calls, Santa Fe (Holy Faith), La Columna (The Column), La Caída (The Fall) and La Sangre (Blood). All these brotherhoods are jam-packed with marvellous works of art by such renowned craftsmen as Pedro Roldán and José de Mora.

Friday is the day of the Cofradía del Nazareno (Brotherhood of Jesus Nazarene), which goes out in procession twice. The first time it carries the paso of Cristo Vivo Camino del Calvario (Living Christ on His Way to Calvary) accompanied by St. Veronica, Mary Magdalene, St. John and Our Lady of Succour and preceded by the torralbo, a capilla, or small orchestra, and a choir singing the Miserere. The proceedings begin at three o’clock in the morning, when the members of the brotherhood are summoned by the Hermandad de Tambores de Lucena (Lucena Brotherhood of Drummers). The procession sets off at six.  Along the way, the Gothic image of Christ stops as many as three times to bestow blessings. In the afternoon there is another procession. This time, the image of Cristo Yacente ((Christ Reclining) is carried in a Rococo style urn, accompanied by the Holy Cross and the Holy Women. Only one procession remains: that of “Nuestra Señora en su Soledad esperando a su hijo Resucitado” (Our Lady in Her Solitude awaiting Her Resurrected Son), which sets out on Saturday night and arrives at its destination on the seraphic morning of Easter Sunday.

The Easter traditions of Lucena date back to the early 16th century. The town’s oldest penitential brotherhood is that of La Santa Vera Cruz (the Holy True Cross), which was founded in its own chapel and is known to have maintained several hospitals for the poor prior to 1554. It was joined in 1564 by the Cofradía de Nuestra Señora de la Soledad (Brotherhood of Our Lady of Solitude), which went out in procession on Good Fridays with images of St. John and Mary Magdalene at the foot of the Cross and before the Holy Sepulchre. The Franciscan brotherhood of La Pasión (The Passion) also dates from the same period (1576) and the end of that same century saw the appearance of the Brotherhood of Jesús Nazareno, which was to become the devotion with the longest history.  In 1606 the Cofradía de Pasión y Gloria de Nuestra Señora del Carmen  (Brotherhood of the Passion and Glory of Our Lady of Mount Carmel) was founded, with its highly popular Holy Tuesday procession of figures, allegories, Romans, angels, crucified penitents, flagellants and nazarenos.

This term refers to a unique way of carrying pasos to a rhythm marked by the solemn beating of a drum. The bearers, called santeros, are organized into squads. Apart from taking part in public ceremonies such as the paseíllo, the atado de la almohada and Easter processions, they assiduously attend their own special retreats known as Juntas de Santeros.

They wear knee length tunics over a shirts, trousers, leather boots and decorative neck-scarves. On their heads they have hoods, although their faces remain uncovered, The colour of the hood varies from one brotherhood to another. The most important santero is the figure known as the manijero, who is in charge of ringing the bell to direct the lifting of the paso.  The drummers, dressed in a similar costume, beat time, changing the rhythm from one image to another.

Some brotherhoods announce the arrival of their pasos with el torralbo, a short, melodic three-part bugle call.

For more than a hundred years the children of Lucena have performed a scaled down version of the Easter celebrations on the Saturday after Easter Sunday, recreating everything from the santería to the actual ceremonial procedures. Participation is very high, with more than a hundred pasos sometimes taking part.

Apart from Easter, the object of greatest religious devotion in Lucena is La Virgen de Araceli (Our Lady of Araceli).  Events take place in Her honour all year long but especially in springtime, with the romería de bajada (downhill pilgrimage), the pregón, church services, rosaries and processions with a carved image of the Virgin dressed as a pilgrim or a member of royalty and carried in a portable shrine or beneath a canopy. Religious services are divided between the chapel dedicated to the Virgin and the parish church of San Mateo. Apart from local people from Lucena they also attract many pilgrims from further afield, devotion to Our Lady of Araceli being popular all over the world. 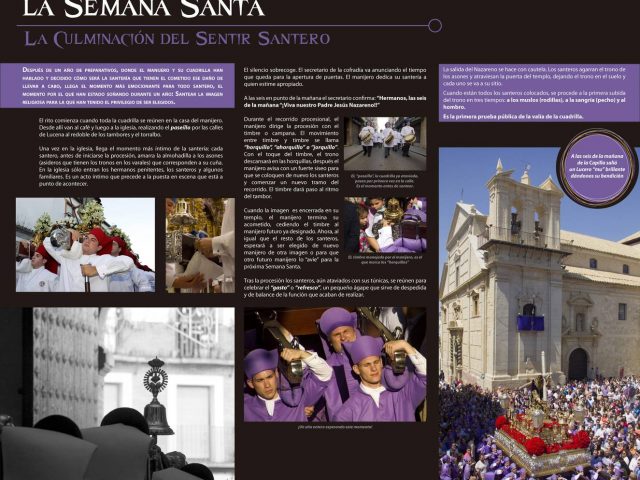 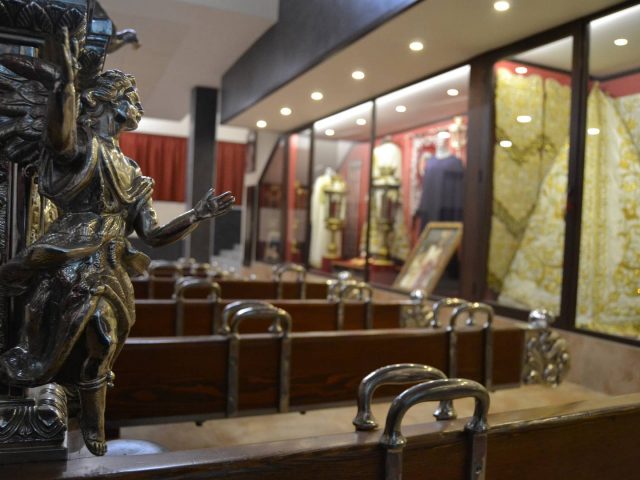 The Brotherhood House will be unveiled on January 24th and on January 31st, 2015, it will open its doors to the public. It is a large house which is worth a visit to discover its interior. Comprising several rooms, it has a reception area, a function room with audio-visual projection equipment, to give an overall idea of Holy Week in Lucena. Inside, you can also see the exhibition area, where you can enjoy interesting examples of religious art and belongings of the Brotherhood, as well as admire the three ‘pasos’ (floats) used on the Holy Tuesday processions. With this tour, the visitor will also have the opportunity to discover more first-hand about the day-to-day life of the Hermandad del Amor (Brotherhood of Love).