EASTER WEEK in Carmona is an emotion-filled Via Crucis, a sublime, solemn manifestation of devotion and aesthetic beauty which engulfs the city’s stone walls and resounds through the its narrow streets and hidden squares. The city’s monumental architecture provides an outstanding backdrop for the processions of its eight cofradías, or religious brotherhoods.

The unquestionable artistic appeal of this emblematic occasion is reflected in its stunning religious imagery, including the oldest object to be paraded through the streets in any of Andalusia’s Easter processions: the representation of Christ as El Señor de la Amargura, carved by Jorge Fernández Alemán in 1521.

Carmona’s enthusiasm for its Easter Week celebrations is evident in its painstaking attention to every last detail of its processions:  faithful reflections of the town’s own idiosyncrasies, which in turn mirror its distended history and the refined character of its inhabitants. History has left its mark on Carmona’s religious brotherhoods, and although they have to a certain extent changed with the times they still retain many of the assets generated by the religious devotion of yesteryear.

The Easter celebrations follow a seven day period dedicated to the titular figure of the Servite Order, Our Lady of Sorrows. The image of the Virgin is paraded, uncovered, through the picturesque, winding streets in its own quarter of town. Each afternoon all the religious brotherhoods in the town go out in procession, passing the balcony occupied by the municipal authorities on their way to the priory church. The processions are organized in the Sevillian style: with nazarenos divided into sections distinguished by insignia, acolytes, pasos carried by costalerosand bands of music. Nevertheless, each one has its own distinct identity.

On Palm Sunday, after the palm processions in the town’s five parishes and the enclosed convents, La Esperanza (Our Lady of Hope) brings joy to the streets amid swirling clouds of petals. On Monday, the procession of La Amargura (Grief) leaves the pointed gate of the church of San Felipe and makes its way gracefully through the suburbs and the historic town centre. On Tuesday, the Jewish Quarter takes to the streets with La Expiración (Christ Expiring). This procession, made up of the younger members of the brotherhood, thrills the whole town with its heartrending saetas. Midweek sees the procession of La Quinta Angustia (Our Lady’s Fifth Sorrow), which proceeds half in silence and half in an atmosphere of festivity until it finally explodes into ecstasy when it reaches Calle Atahona. The same scene is relived the following day in the Santiago quarter after the in Coena Domini Mass.

Liturgically, Friday is a day of mourning. The monuments are closed and the brotherhoods of La Humildad (Humility) and La Paciencia (Patience) go out in procession, their impressive pasos shrouded in crape. Nuestro Padre (Our Father) also goes out, winding its way through the streets in silence. On Saturday evening, the Santo Entierro (Holy Burial), accompanied by nazarenos from all the town’s brotherhood’s, draws the cycle of processions to a close. And the mourning is transformed into joy with La Resurrección (The Resurrection).

On 11th March 1521 a group of 1,500 people from Carmona made a pilgrimage to Seville to implore La Virgen de la Antigua (Our Lady the Virgin of Antiquity) to send the rain they were so desperate for. On their way back, they were seen off by the Seville authorities at the cross known as the Cruz del Campo. That ceremony is considered the town’s earliest penitential procession.

Up until the 1980s, Carmona’s pasos were carried on their bearers’ shoulders by means of poles inserted perpendicularly between the stretcher beams.

One of the most attractive aspects of Easter Week in Carmona is its devotional images: figures of Christ, the Virgin Mary and other, secondary characters created by some of western Andalusia’s most highly renowned sculptors. Carmona is home to the oldest carved image still taken out procession – the Cristo de la Amargura (Christ of Grief), executed by Jorge Fernández Alemán in1521 – and also to the late Mannerist style Nuestro Padre Jesús Nazareno (Our Father Jesus Nazarene), an image sculpted by Francisco de Ocampo in 1607 and which constitutes the earliest known iconographical model for this type of Christ figure.

Carmona’s processions, with their nazarenos, costaleros and acolytes bearing insignia and pasos steeped in history, accompany the scenes of Christ’s Passion like entourages at royal funerals.

Historical items of interest conserved by the different brotherhoods include the paso of Los Nazarenos (1698); the canastilla (platform) of the Santo Entierro; the Rococo simpecado (standard) of La Expiración; the 19th century mantle of La Virgen de la Paciencia (Our Lady of Patience), embroidered by the Antúnez sisters; and the openwork side hangings on the canopy above the image of La Virgen de las Angustias (Our Lady of Distress) – the earliest example of this decorative technique – produced by the Olmo workshop in 1930.

The parish churches and convents of Carmona maintain the custom of erecting monuments to the Holy Sacrament following the in Coena Domini Mass on Holy Thursday. While these monuments are open their displays of ornamental jewels  surrounded by abundant flowers and candles attract a constant flow of visitors, above all women wearing the traditional mantilla headdresses. 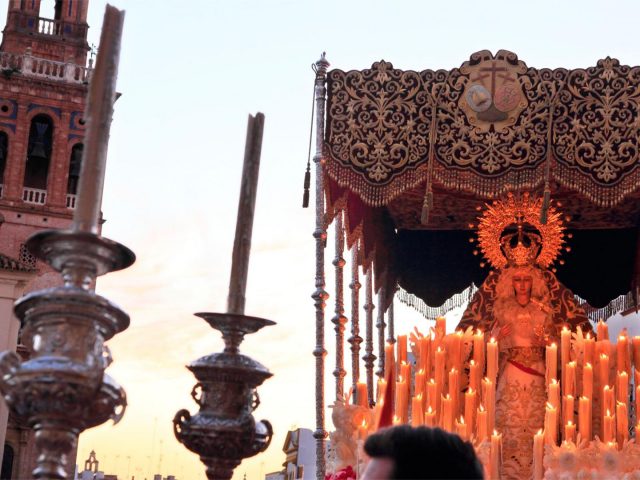