Baena’s cultural heritage ranges from its important archaeological remains (with those at TORREPAREDONES being the most signicant), some of which date back 3,500 years, to its rich heritage of both civil and religious architecture.

The city’s religious architecture features a number of important churches, such as SANTA MARÍA LA MAYOR and the CONVENTUAL DE MADRE DE DIOS.

The PLAZA DE LA CONSTITUCIÓN forms the heart of the city, combining Baroque buildings, such as the CASA DEL MONTE, with modern buildings such as the TOWN HALL.

The most traditional area of the city is LA ALMEDINA which was originally Moorish, and which features the remains of the CASTLE and two of the city’s most representative symbols: the copy of the IBERIAN LION (León Ibérico) and the “CRISMÓN DE BAENA”, a Visigoth cross. A stroll around this beautiful city is completed by enjoying its arches (CONSOLACIÓN AND OSCURO) and its HISTORIC HOUSES.

Baena’s History and Archaeology Museum is located in Casa de la Tercia house. Construction works on this building started in 1792, but were not concluded until 1795, according to the inscription found in the central patio. It was founded by the church to collect part of the ecclesiastic tithes and other income corresponding to the Crown. In 1841, the Ecclesiastical Confiscations of Mendizabal abolished payments to the Church, meaning that the building was no longer used for its foreseen use. It therefore became privately owned. At the start of the 20th century it was adapted and used as a shelter. During the Civil War, between 1936-1939, it was used as a prison. From 1960, the town hall was the leaseholder of the property, until 1984 when it became part of the town’s heritage. The building was renovated in 2010 to house the museum. The Museum’s collections include paleontologic remains, and especially archaeological remains from the Paleolithic era until the Middle Ages, passing through the Metal Ages, Orientalizing period. 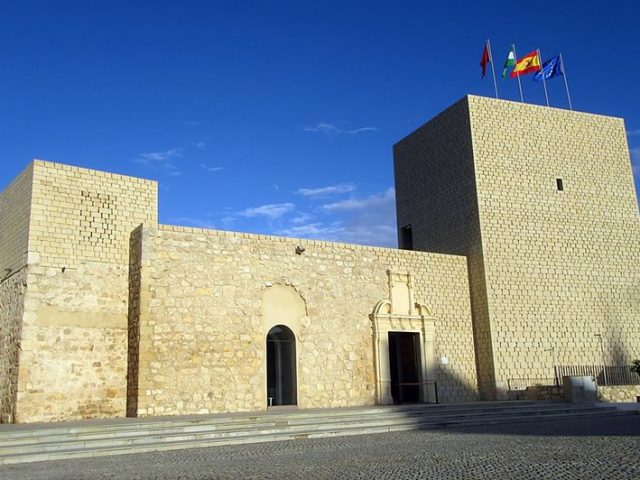 Although the Baena’s current location originates in the Moorish hisn (castle), then named Bayyana as documented in the 9th century, archaeologists have yet to unearth proof of Islamic, Emirate or Caliphate occupation. By means of pact, the Moors handed Baena over to Ferdinand III in 1241. This was the onset of a slow manorialism process, during which the fortress was erected. This construct would play a significant role, since it was on the same border as the Nasrid Kingdom of Granada. There are no reliable data with regard the Almedina’s walled structure construction, although some sections, such as the Arco de Consolación and the Arco Oscuro horseshoe entrance arches are reminiscent of Almoravid and Almohad architecture, respectively. The castle has survived until our times and is located on the west side of the Almedina enclosure, and resembles a 14th or 15th century Christian construction. It is currently in a state of ruin as a consequence of the demolition carried out during the 20th century. However, Baena town council initiated a project that will recover most of the fortress. Archaeological excavations discovered several room structures linked to its last occupation (late 19th century/ early 20th century). Several doors were also uncovered; […] 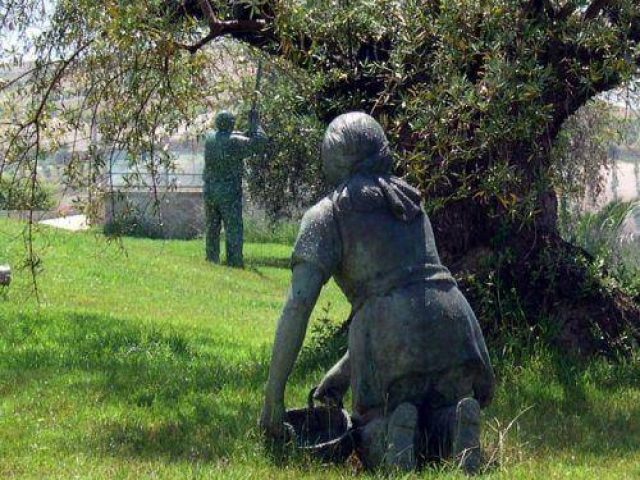 A beautiful, open square in front of the Nuestra Señora de Guadalupe church. Thanks to recent renovation works, it has become a balcony that opens out onto the Sierras Subbéticas mountains, offering a spectacular view of the region’s landscape. On one side of the square is a monument dedicated to the town’s olive harvesters. The bronze sculptures represent men and women harvesting the crop in the countryside, and are juxtaposed with real olive trees. The composition is a beautiful contrast in the heart of the town centre. 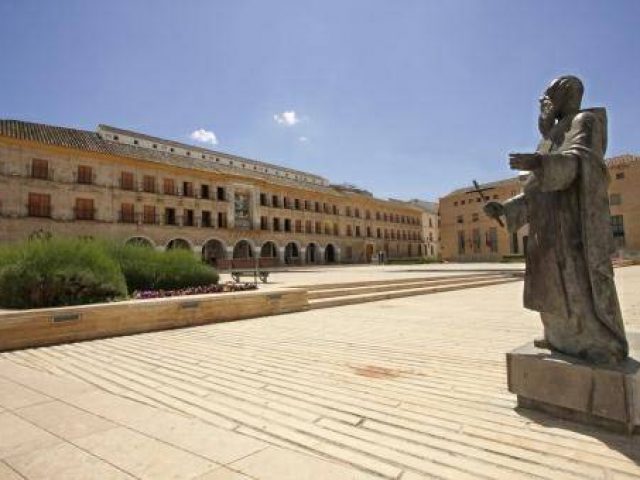 Baena’s Plaza de la Constitución is the real heart of the town. There are 18th century baroque buildings such as the Monte building, as well as more modern examples like local government buildings and the Liceo theatre. The Town Hall is at the front of the Plaza, a recently constructed building. It received an award from Western Andalusia’s Official Architects’ College in 1989. On a pedestal in front of the town hall, we can see the monument to the figure of the Jew. It is sculpted in bronze and represents the main character of Baena’s Easter Week, the Colinegro Jew and the Colinblanco Jew. There are also two more statues in Plaza de la Constitución, commemorating Santo Domingo de Henares and Juan Alfonso de Baena. The former was an 18th century Dominican monk sent as a missionary to Vietnam, where in 1802 he was named bishop and where he later died as a martyr and was canonized by John Paul II. The latter was a 15th century poet covering medieval texts in a manuscript known as Baena’s collection of verse. To the right of the Plaza is the Liceo theatre, the town’s centre for cultural activities. It opened in 1999 […] 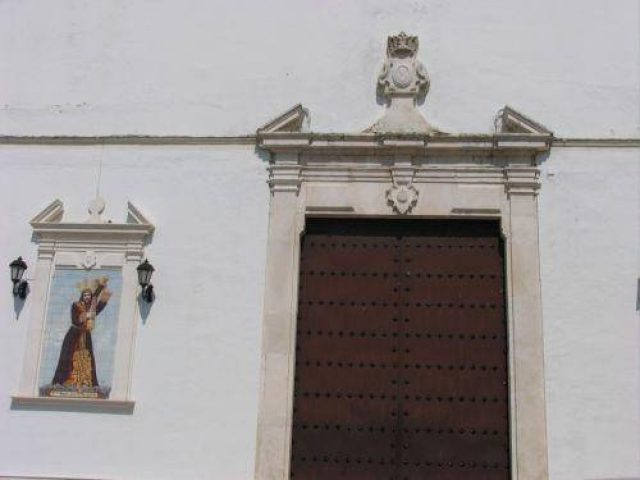 A single-naved church with crossing, covered with a half barrel vault with supporting arches and lunettes. All walls are decorated with paintings and rococo decoration, making it an impressive ensemble. It dates back to the 17th century. The main altarpiece is polychromed, carved wood, from 1740. The venerable icon of the town’s patron is found within this church: Nuestro Padre Jesús Nazareno, whose head is an 18th century Italian sculpture.

Baena’s Madre de Dios Dominican convent was erected in the heart of the Almedina, between the castle and the Santa María la Mayor church. It was founded in 1510. Its floor plan consists of a single nave and crossing with adjoining chapels covered by vaulted ceilings with lunettes.  The convent church has two doors to this vestibule; the first of which is of primitive stonework and is work of the Catholic Monarchs’ era. The other is more classical, of lesser merit and seems to date back to the 17th century. In addition to the painting that dominates the main altar, there are 64 paintings on the altarpiece, of which the two images in the lower area are attributed to the Bossanos studio and depict the Epiphany and Adoration of the Apostles. The choir, of plateresque decoration, is located at ground level. The seating is 16th century carved wood and is separated by baluster columns and lonic capitals, crowned by crenellation with busts of the apostles, saints, and fathers of the church. 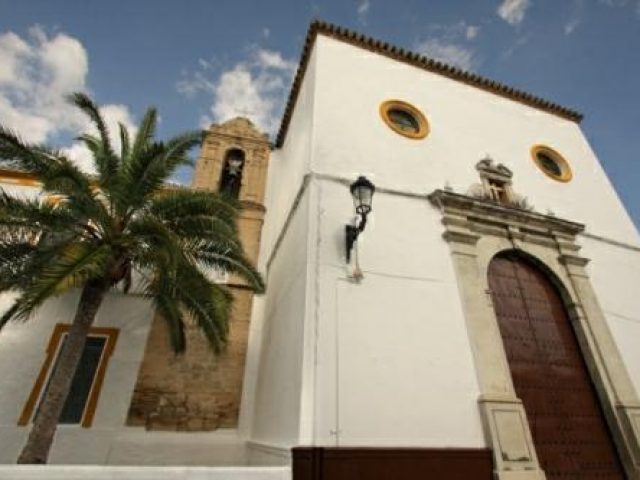 This church was constructed in 1711 by the Marichica brothers. It was the ancient Jesús Nazareno hospital  for acute illnesses. It has a beautiful door with railings, from which we can observe a cloistered patio with columns and capitals forming simple semi-circular arches. The floor is made up of chequered tiles and the ceiling has beams. 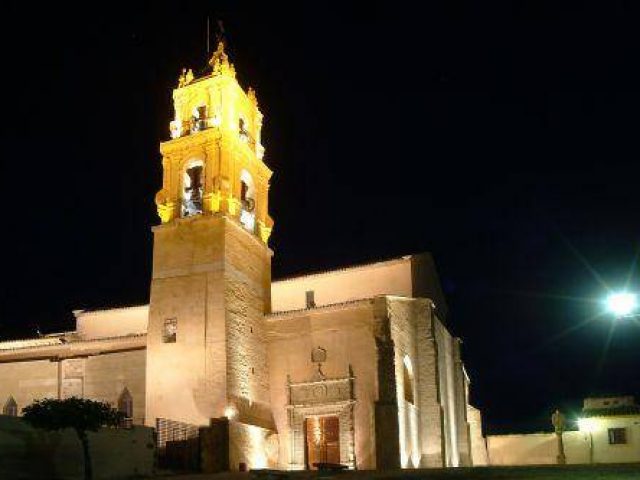 The first reference to this church, located in the highest part of the town, dates back to the 13th century. It is thought that it may have been the site of a mosque, given its location, importance in the town and due to references made in  documents from that period. Its floor plan consists of three naves, with no crossing, separated by ogival arches, sat on Gothic pillars, typical of 16th century Cordoban architecture. From the outside, there are two doors, named the Angel and the Forgiveness. The first was named as such due to the monument to San Rafael, which is in front of it. It is remarkable due to its convex and concave grid on the jambs and lintel, typical of Cordoban architecture. The other door (Forgiveness) is plateresque in style from the end of the 17th century. One of the most prized and well-preserved pieces of art in the church is the large railing that used to enclose the main altar before it was restored in 2003. It is plateresque in style, from the mid 16th century, given its crenellation, embossed friezes and the way the elements are distributed. It is typical of the Andalusian railings that […] 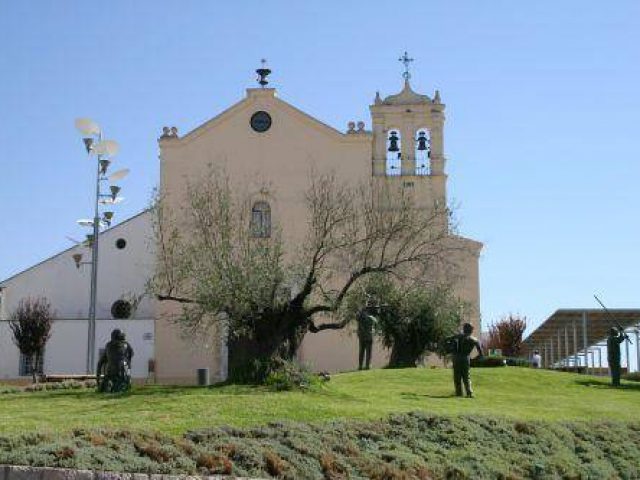 An ancient 16th century Dominican convent, baroque in style, which worships the Virgen de Guadalupe, Baena’s patron saint. It has a large central nave, with no crossing, and two side naves, separated by semi-circular arches. The 16th century Mudejar coffered ceiling that covers the main altar is quite remarkable: it is the only one of its kind in the whole province. The polychromed wooden altarpiece from the second third of the 18th century is also impressive. The icon of Cristo de la Sangre is worthy of mentioning, dating back to the 17th century and declared as being a cultural asset to Andalusia in 1988. According to professor Hernández Díaz, “it is a masterly piece”, which must be attributable to the García brothers. 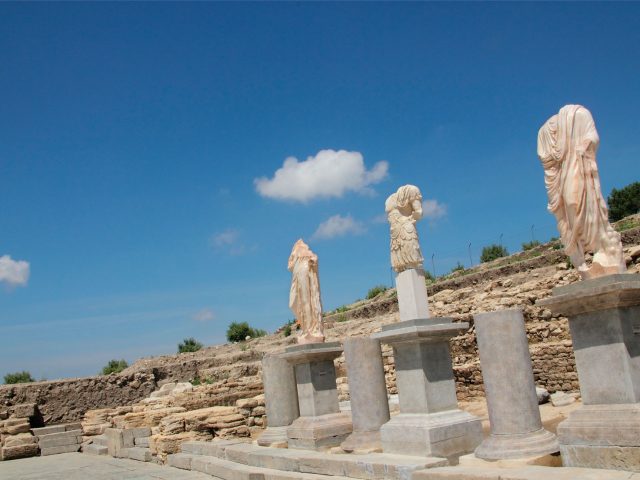 The main historical inhabited enclave in Baena’s rural setting is the town known as Torreparedones. It was first Iberian and Roman, it then became a military enclave during the Medieval period and was rediscovered in recent excavations. It was inhabited for at least 3500 years, from the Copper Age until the Low Middles Ages. Torreparedones reached its height during Iberian and Roman times. It’s powerful wall, reinforced with towers, surrounding a 10.5-Ha space was already present from the 6th century BC. The site was known since the Early Modern Period given the remarkable remains that appeared. Many scholars mentioned it as an important site “during Roman times” or in reference to the controversial martyrs, Saints Nunil and Alodia. The chance finding of “Pompey’s Mausoleum” in 1833 was a milestone in the site’s history, as it gained the attention of many Spanish and foreign researchers. It was a monumental tomb that contained incinerated remains of more than 12 family members, with their names engraved on stone urns. Torreparedones reached its height during the Iberian and Roman era when it achieved colony or town status. The most outstanding findings correspond to this era. One of the most important settlements to date is […] 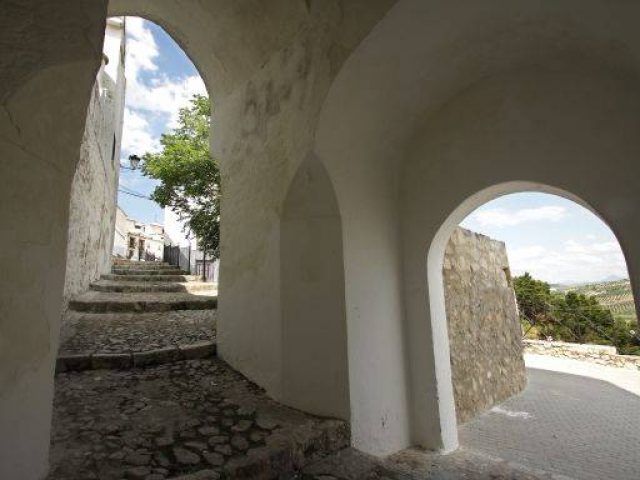 La Almedina means ‘town par excellence’ in Arabic and is the highest part of the town. Its streets and corners evoke times and places, typical of the Arabic era. Plaza de Marinalba is located in Baena’s Almedina, and can be accessed through the Arch of Santa Barbara, where we find the Crismón de Baena, a large Visigoth cross that symbolises Christianity, worked in bronze, which became the icon for the town’s civilisation and culture. The Plaza Palacio is the heart of Arabic and Medieval Baena, which appears to be dominated by another of the town’s most representative symbols: Baena’s Iberian Lion. It is a bronze reproduction of the original that can be found in the Archaeological Museum of Madrid. La Plaza Francisco Valverde or Plaza Vieja, pays homage to the great 19th century writer and historian Francisco Valverde y Perales who brought us the “Historia de la Villa de Baena” a book about the history of the town. The town’s most important monuments are all found in this Arab barrio, such as the Santa María la Mayor church, the Madre de Dios convent and the castle’s remains. 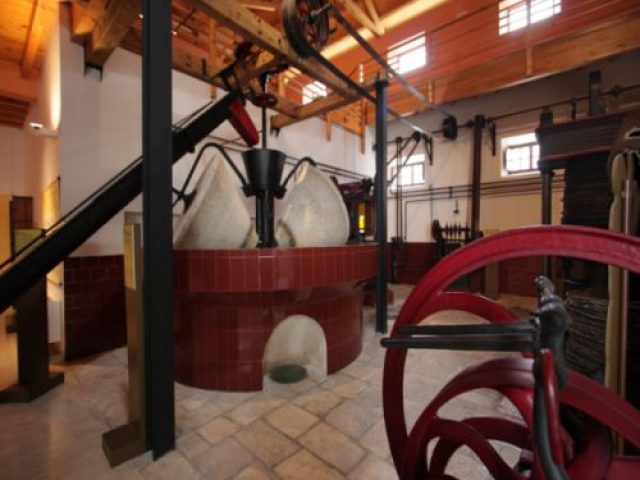 This museum showcases the most important aspects of the culture surrounding olive farming and olive oil production. It is an educational environment where visitors are taken on a journey of the senses, where they can get to know and deepen their knowledge of this age-old culture, combining the exchange of knowledge with activities and healthy living tips. The building that houses Baena’s Olive and Olive Oil Museum was José Alcalá Santaella’s mill until 1959. Most of the mill’s machinery dates back to the mid 19th century. The exhibition space is more than 800 m2 and is organised over two floors. There is a reception area, the restored and functioning mill and bodega on the GROUND FLOOR, as well as a multi-purpose room. The UPPER FLOOR holds a library and olive oil workshop, and several exposition areas that show how oil can be used as a source of light and heat, electric energy and explains its nutritive goodness. There is also information about olive’s symbolic importance, olive-related proverbs and its popular medicinal value, etc.