Alcalá la Real’s most emblematic monument is the LA MOTA FORTRESS (National Monument), where the town was located until the 16th century. The LIFE ON THE FRONTIER VISITOR CENTRE can be found within its walls. Meandering through the streets of this ancient medieval town, you can discover the civil and religious buildings, such as the PRISON TOWER, the ALCAZABA citadel, the MAJOR ABBEY CHURCH, the PLAZA ALTA, the ancient neighbourhood EL BAHONDILLO and the NEVERO, an area used to store snow and food.

The BARRIO DE LAS CRUCES is well worth a visit and stretches from the ECCE HOMO CHAPEL to the MIRADOR SAN JUDAS TADEO, which oers panoramic views over this typical Andalusian neighbourhood and where unforgettable sunsets can be admired.

The network of watchtowers of its surroundings have been preserved, part of the border system from the Late Middle Ages, connected to the fortress of La Mota.

A small chapel, built in the 16th century, which houses the picture of an Ecce-Homo inside. This spot is one of the best examples of popular religiosity, deep roots and traditions, which are ever present in day-to-day lives in Andalusia’s cities and towns. This is where the Stations of the Cross started, which continued across the hillside of Cerro de las Cruces and finished at the San Judas Tadeo hermitage, where they worshipped the image of Reclining Christ.

This ancient convent was built in the mid-17th century and can be found to the south of the Parque de los Álamos. After 1835, with the Ecclesiastical Confiscations of Mendizabal, it was converted into private housing and an olive oil factory. The Renaissance façade was modified with an artistic double flight of steps and wide windows. On the interior, only the basic church structure remains, which consists of a single nave with side chapels and a vestibule at the atrium. It is currently the home to the Archive and town library. 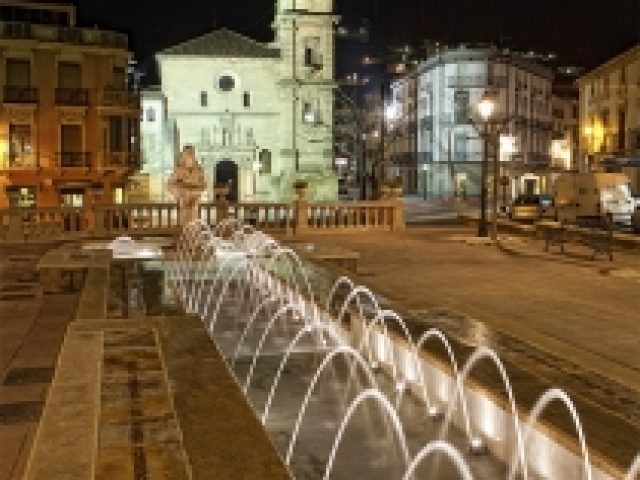 Going up Real Street, we find with The Mora Fountain, in front of Consolación Church. There is two hypothesis about the name: the first identified with an Islamic woman and gives rise to the legend of the love between the Moorish and Christian during the siege of the walled city. The second would refer to the fruit of the mulberry and the importance of raising silkworms was in town. 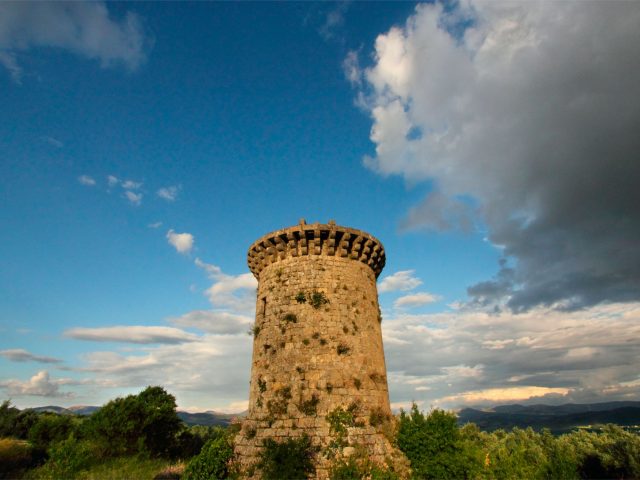 There is a wide network of watchtowers around Alcalá la Real, which was the key feature of the border system during the low Middle Ages. They served as a means of communication between castles and towns. Nine preserved towers can be visited around the Fortaleza de la Mota. The Watchtower route is a hiking trail that accesses the tower of Moraleja and Cascante from the town. Near Cascante, is the Fuente del Rey site, where an ancient sheltered laundry and the Virgen de Coronada Church is preserved, not to mention the 16th century Santa Ana Church, in the small town of the same name.

Built on the site of the ancient hospital “Del Dulce Nombre de Jesús.” Its construction started in 1630, which lends to its current appearance.

The San Juan museum is located within the San Juan church (16th and 17th century),  found on calle Rosario.  It houses the icon of Cristo de la Salud. This museum allows visitors to see interesting samples of Alcalá la Real’s religiosity, alongside elements that are characteristic of biblical diorama, such as “rostrillos” to give character to biblical figures, typical of Easter Week in Alcalá. Contact: Antonio Pérez Rosales. 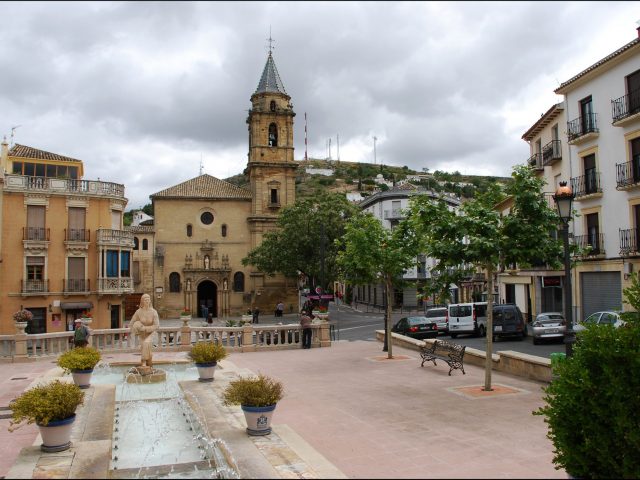 This church is also known as Santa María la Mayor church, as it was the new site of the Fortaleza de la Mota’s abbey church, becoming the town’s main church following its desacralisation and destruction. The friars of the third Franciscan Order wer­e accommodated in this church at the start of the 16th century, but this church’s constructive process wa­s long and full of modifications, stretching out until the end of the 18th century. The Virgen de las Mercedes, the town’s patron, is found in this church. 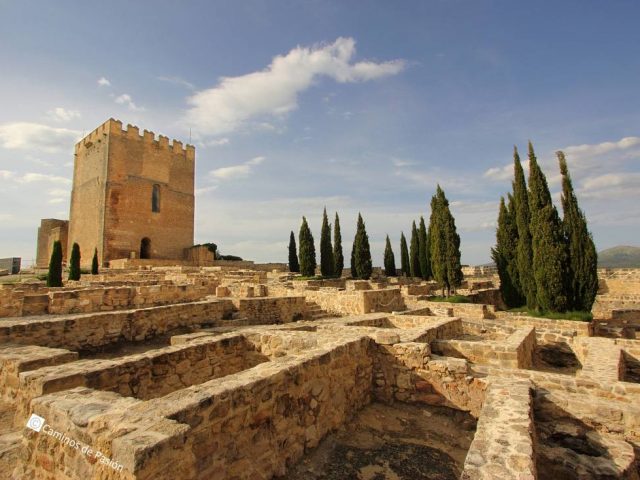 Alcalá la Real was an important strategic enclave since pre-historic times. The cerro de la Mota hill served as an area that controlled who or what entered the city, and became a privileged place to settle. The Fortaleza de la Mota monumental complex is strategically set on the peak of this hill, at 1033 metres altitude. These characteristics, its shape and location, lend it a predominant view, a perfect natural watchtower, that dominated several kilometres of the surrounding countryside. The Islamic conquest and initiating the castellation of the hillside, brought the continued development of the walled complex and its urban fabric. The second Lord of the Kingdom of Granada, “Aben-abus Ben-Zeiri”, ordered the construction of the La Mota castle, in around the year 1000. The Moors built a city with a layout that followed the same models as the Caliphal and Almohad eras. There would have been buildings such as the military alcazaba citadel or the mosque, of which remains can no longer be identified. However, despite the clear Al-Andalus hallmark, the fortress is today the main product of the architectural reforms that the Christians carried out after their reconquest in 1341 with Alfonso XI. The old walled city or fortress also had religious, administrative and governmental buildings, as well as shopping centres. […]

This church is a mixture of Neoclassical and baroque styles. Its construction started in 1746 and finished at the start of the 19th century. The vaulted ceiling is impressive: two supporting arches separate three small vaults of concentric masonry, with a skylight in the centre.

One of the best views of the town can be enjoyed from this spot, located to the north east of the town. Next to the viewpoint is the San Marcos chapel, which gives the hillside its name. It was built in the 16th century, is small in size and of sober design with a straight-lined Renaissance façade. Inside we can observe the icon of Our Lady de la Cabeza.

This neighbourhood is located on the Cerro de las Cruces hillside, facing the Cerro de la Mota hillside. This popular district owes its name to the large number of white crosses in the manner of a Via Crucis, ascending to the chapel of Fátima from Juego de Pelota. At the top of the hill, there is a spectacular viewpoint, where you can admire Alcalá and its fortress.

This Roman site has both, urban and rural features. With an area larger than a Roman Villae, it could be considered to be a vicus or a small town. Its size is unknown but may be related to other defensive settlements of the same era, which were already known in Alcalá la Real. This vicus dates from the 1st to 5th century AD and experienced at least two important moments of destruction. The first was in the second half of 3rd century AD caused by a large fire. The other was during the 4th century. The name Domus Herculana is used to describe a building, room or house, where different elements related to the figure of the Roman Hercules have been found. The public is able to better understand the importance of these ruins thanks to the installations and explanatory elements incorporated.

This beautiful Renaissance fountain, called the Pilar de los Álamos, is located directly in front of Los Álamos park. It was built in 1552 and was designed by Jacobo Florentino ‘el florentín’, although he did not complete its construction. He was the predecessor of Diego de Siloé in Los Jerónimos church in Granada and both artists were considered the pioneers of Andalusian Renaissance. Historical accounts recall that this fountain once collected water from ‘La Mina’ spring, located close to the natural site Los Llanos. The fountain’s façade is made of sandstone and displays two warriors holding Alcalá’s coat of arms, protected by two griffins, mythological creatures with the body of a lion and the head and wings of an eagle, which guard treasures. These figures can also be found on other buildings in the town, as in heraldry, these imaginary beings are always related to protecting and guarding the town, a role that Alcalá la Real played for more than a century before the conquest of Granada. To this end, the inscription present on the emblem’s orle reads “key, guard and defence for the Castillian kingdoms”, the title granted to the town by the Catholic Monarchs.

This church is in front of the Paseo de los Álamos. It was built in the 18th century over a small 16th century chapel. The floor plan is ellipsoidal in shape with four rectangular spaces projecting from it, which correspond to the atrium, east end and side chapels. The perfection of its elliptical floor plan is its brick vault ceiling is outstanding. The façade is divided into three levels: the first with a very moulded semicircular arch portal flanked by Tuscan pilasters, the second with a niche framed by lonic columns and pinnacles, and the upper part crowned with a steeple decorated with ailerons and topped with pinnacles. 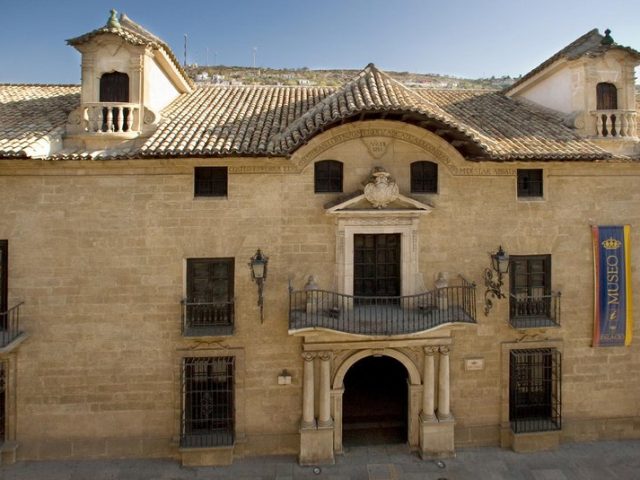 The ancient Abbey Palace was reconstructed in 1781 by the Abbot Esteban Lorenza de Mendoza y Gatica, given the state of ruin of the original palace within the Fortaleza de la Mota. The new building was the end result of the aggregation of several structures, brought together by the single façade. This building was used until 1851, when the Abbey of Alcalá la Real was abolished. After years of uncertain future, it became the abbey archive and the home of the Archpriest of the Ecclesiastical Territory. Currently, and after years of restoration, the Abbey Palace is the headquarters of the Municipal Museum. This new museum was created to display, preserve and promote archaeological, ethnological, anthropological, paleontological and scientific exhibits organised into different display areas using the latest technologies.Through innovative means, the museum allows visitors to become better acquainted with Alcalá la Real’s heritage and traces of its past. It gives visitors the chance to have an overview of the town’s peculiarities, places of interest and its surrounds. Exhibition spaces: The flour room (dedicated to flour mill traditions), geology, minerals and fossils, Paleolithic, Neolithic, Copper and Bronze, Iberian world, Roman world, medieval, etc.